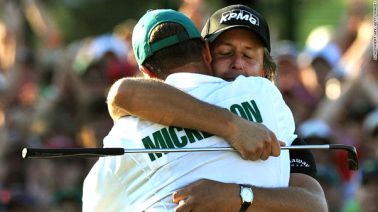 The increasing competition for big prize money at the top of the Pro Golf game has led to some high profile splits between Golfer and Caddie.

For the top Golfers’ caddies, there is a good life to be earned from carrying the bag. Not just a percentage of the prize money and any bonuses which may be accrued, but lucrative sponsorship deals to sport the embroidered logo golf cap or the golf shirt with the embroidered logo sleeve whilst accompanying the top golfer around the course, separated by only a few feet and in full view of the cameras.

And yet, it must be difficult working as closely as a golf caddy does with his professional Golfer.

They are together, only a few feet apart, for up to seven hours per day if not longer. They are together through tense, competitive hours every day on the course and everything that the caddy offers by way of knowledge or advice must be spot on. It’s not just the caddy's income that is at stake!

The Caddy/Professional partnership is one of the great, modern day, sporting, team partnerships which, when it works in harmony, is a thing of beauty. Two minds fathoming out the best strategy to be executed successfully by the professional.

All the caddy requires do is; know the course inside out; know how every possible putt will break; know how to interpret the effect of the winds above the trees; know how to say the right words at the right time to his professional to ensure the correct outcome....and to do all of this, time after time, week in week out …. year in year out .... all in harmony.  Good partnerships can last for many years if not for the best part of a career.

However, we should not underestimate the pressure. Pro Golfers want to win. In fact, they need to win, not only to earn the prize money, but to gain lucrative sponsorship deals for playing with top brand golf clubs or wearing golf shirts with the sponsors logo embroidered strikingly on the front or rear.  The wrong advice from the caddy, indeed the wrong expression from the caddy at the wrong time could make the difference between winning and losing a tournament. One has only to look at footage of the embrace between caddy and pro at the conclusion of a major championship to see how close the relationship has become.

However, things do not always go well and for a number of reasons these relationships, which have worked well in the past, lose their harmony and the subsequent tensions affect performance. Whether the split reveals itself as a public spat or as a gentlemanly parting of the ways, it says much about the height of the tensions that have built up between the two.

Some recent examples include Danny Willet's caddie, Jonathan Smart, parting company with his professional and walking off the course during a tournament round after some words were said. They had been together for years and were, prior that incident, good friends.  Robert Allenby and his caddie rather publicly split up on the ninth hole of the 2015 Canadian Masters after words were said. More recently, Phil Mickleson and his caddie of over 20 years, Jim (Bones) Mackay, announced that their partnership had ended following the longest lean streak Phil had endured for many a year.  Now Rory McIlroy and his friend and caddie, JP Fitzgerald, have stopped working together, again following Rory’s three year "Majorless" drought.

All seems very dramatic. Yet when you read that Billy Horschel's caddie, Micah Fugitt, earned around $1.6m last year from his work, then one can understand the pressures that can build up in these partnerships when the line between success and failure may only be a couple of shots over four rounds of tournament golf involving, say, 280 golf shots on varying terrain over four days.

Seems like a far cry from the Seve Ballesteros quote about caddies who should just "turn up, keep up and shut up."  Maybe this is what Lydia Ko believes as she looks to appoint her 10th caddie in her short career to date. Millionaire golf caddies eh!!  Ask the majority of the pro’s though. The good ones are worth every last dollar!