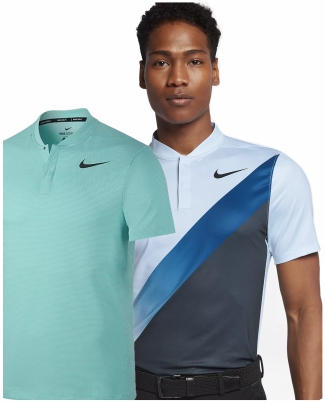 Can Grandad break the Dress Code?

The Grandad Style golf shirt is on the rise. Will it accompny the rise of the young American golfers?

Cool and stylish when worn by Tiger and Rory but not within many golf clubs’ dress code parameters including Carnoustie. “The main items which are not acceptable on the courses or in the Clubhouse are blue denim jeans, sleeveless or collarless shirts, or shirts carrying non-golf logos e.g. soccer or rugby shirts.”.  We are talking about the rise and rise of the “grandad style golf shirt” as seen in this year’s open at Carnoustie. Normally the fashion changes are brought to our attention by the younger brigade. However, in this instance the Brand has cleverly driven this style using key, iconic golfers who are certainly not spring chickens. Both Tiger, who is over 40 and Rory, who is 30 next time round, presented very well in the Grandad collar golf shirt and looked very comfortable and at ease in this “modern” golf shirt style. It will be interesting to see how the middle age public take to this type of golf attire although it will be more interesting to see how the golf club dress code committees react to it, especially if it does not display the key golf clothing brand on it!

But it wasn’t the golf shirts that took centre stage at this year’s Open Golf Championship. It was the golf itself and the theatre it provided on the final day. Up until that point, the headlines were all about the young Americans and rightly so. They had given a masterclass in playing links golf in the face of the full array of golfing conditions that only Scotland could throw at them.

But as happens so often in the final day, it was the older more experienced heads that won through, even from far back. Francesco Molinari at 35 years of age showed real consistency and composure to take the day.

So are the young Americans on a roll as is often touted in the press?

Looking at the three “Majors” played so far this year, there could be many interpretations. Let’s look at the top twelve tied in all three tournaments played. The Masters, The US Open and The Open Championship at Carnoustie.

There have been two American winners and one Italian winner. Fifty four percent of those who achieved a top twelve position were 30 years old and under (17% were the young guns aged 25 and under). On the other hand, forty six percent were over 30 years of age and eleven percent were over 40!!  Overall, in the top twelve finishers in each of the 3 majors 56% were American and 46% were from the rest of the world.

Awarding 12 points for a first place down to 1 point for a twelfth place there are eleven golfers with 12 points or more over these three tournaments, with six from America and five from Europe. The four leading Americans in this exercise are Patrick Reed (aged 27), Xander Schauffele (24), Tony Finau (28) and Jordan Speith (24). The four leading Europeans are Rory McIlroy (29), Justin Rose (37), Henrik Stenson (42) and Francesco Molinari (35). So, pick your argument from these statistics. What seems to be the case is that the young Americans are achieving and are highly competitive within the “Major” competitions whereas the rest of the world is relying on the old guard and that won’t continue. Whether it be this Ryder Cup or the next, the young American talent is on the march. Is there any holding them back and will they be backing Grandad?